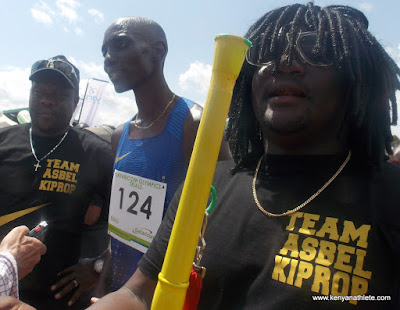 We do not know everything regarding Asbel Kiprop's case. But, below is what we know, so far, which is in the public domain as well as being "probably" part of the submission by Asbel Kiprop's lawyer. Perhaps, this would be enough information if carefully analyzed to conclude this case.
1. The sample was collected and money asked for. The integrity of the process was fatally damaged.
2. Athlete was given notice/tip off, of intention to collect sample. This was a fatal irregularity.
3. Results for sample "A" and sample" B" are different despite coming from same source, same time, same laboratory and people examing both samples.
4. Tests on other athletes shows labaratories occasionally get mistaken conclusion that natural EPO is artificial. AIU refused retest even to confirm DNA on sample belong to Asbel. The tests are as fact matters of interpretation,are relative and subjective. The other athletes whose initial tests showed positive artificial EPO, but were overturned, very especially with help of their Countries(which Asbel unfotunately didn't get) including Bernard Lagat, USA,Virginia B Luna & Rodriquez Martinez both of Spain,& Rutger Bake, Belgium.

5. The person who collected the sample, who also asked for money, and gave the irregular tip-off was withdrawn from the case and his role in the process left blank. This is also consistent with admission of fatal irregularity.
5. No declaration was made that the vessel used to collect the sample was clean,uncontaminated,& not spiked as required in IAAF sample collection regulations.
6. To date WADA whose accredited Laboratory was used to examine the sample states that there are no results on Asbel's sample, in contradistinction from what IAAF/AIU alleged positive results.
7. Asbel's blood samples for 22nd Nov 2017 being 5 days before the implicated 27th Nov 2017 tests does not support the alleged existence of EPO. Neither does blood sample collected 2 days after on 29th November. If he had doped these samples of 22nd and 29th would have shown in blood passports.
8.The primary document called DCF(Dopping Control Form-document for/on sample collection ) upon which AIU is relying to make their case is fatally false in parts, and misrepresentative in others,and incomplete in material details.
9.The sample was send/addressed initially to wrong address, other than the laboratory where it was meant to go for testing.
10.Despite being told IAAF/AIU would collect sample Asbel kiprop availed himself & gave his sample. If he had doped he would not avail himself to supply sample and be found out. Option of not turning up has negligeable consequence, just a reprimand. His turn up is consistent with innocence .
11. Asbel had no reason to dope,as he was off competition. His next competition was to be in May 2018, 7 months away from the date of the sample collection(27th/11/2017). EPO stays in the blood for maximum 3 months, hence could not help in respect to competition 7 months away.

Amazing elite start lists for the Bahrain Night half marathon

The inaugural Bahrain half marathon happens tonight the 15th of March and, besides it being the richest half marathon in the world with the winner walking away with $100,000, the start lists are epic!
Twelve men on the list have run under 60 minutes for the half marathon while there are eleven women who have run faster than 1:09:00.
Below is the full elite start list.