Eldoret – The City of Champions

This is not an idle boast and the chance of running into an Olympic or other major race winner as you go about your daily job is very common. Most of these champions are out training on the roads or the stadiums in the mornings and evenings, as part of their daily routines.

They then go out of the country, run a few races, and come back with enough money to support their families. It’s a major driving force for the young kids in school and they look up to these guys for motivation.

This is similar to kids in America wanting to play basketball, because their idols play the game, and they see the financial success they have.

Justin and his family were kind enough to drive me around and we spent the day visiting a lot of the places, you read about when it comes to running in Eldoret. 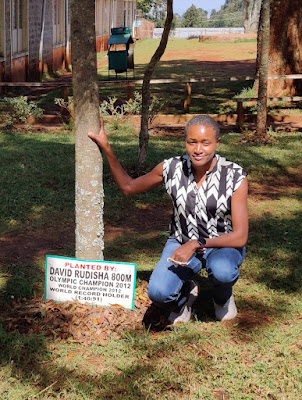 We drove out to St Patricks Iten, which boasts some of the best middle and long distance runners in the world. I had the chance to take lots of pictures in the school with the plaques commemorating these athletes. My favorite and probably the most famous is David Rudisha the current 800M world record holder.

Just about everywhere we looked especially late in the afternoon, there were folks running, which reinforces running as a way of life.

Justin organized for me to join one of the groups he trains with when he is in town.

The group turned out to be some amazing athletes, but I did not realize this until after our training.

The running group meets at the Annex, at Moi University. On the days menu was one word “Mazoezi” - Exercises.

I found out later that this group comprises of road and track runners. The marathon guys in this group are probably in the 2:10 – 2:20 range. In any other country other than Kenya, these guys would be in the Olympic teams of those countries. And yet there was no bragging, or showing off, they are the nicest and some of the humblest people I have interacted with.

The group was started by multiple Olympic Champion, Ezekiel Kemboi years ago and has continued to flourish. Paul Chelimo the 2020 Olympics Bronze medalist trained with the group before Tokyo. Bethwel Yegon who seemed to have come out of nowhere to finish second in the 2021 Berlin Marathon has been a part of this group for a while.

Eldoret is the sort of a place where you rub shoulders daily with star athletes, but you have no idea. Over the two days I was there, I ran into so many of these folks, and by the end of it, I had gotten into the local lingo.

As we got ready to start, the banter was light, but when I paid attention to some of the workouts, they were discussing I was floored. Track workouts 1200*12 at under 3 minutes / km (about 4:50 minutes / mile).

The Training - The Warm-Up

We started with a 15-minute warm-up jog. This was very slow, and I finally understood, why Justin keeps telling me to slow down in my warm-ups. Our pace was in the 11 to 14 minutes / mile range, but nobody would rush it, as it was so important to warm up properly.

The team has a deep understanding and has taken to heart that marathon training is a slow, steady journey that calls for a lot of patience. It’s a lesson that can only be fully appreciated by being a part of the process.

It had rained the night before, so the track was wet, and we had to work out at a lower field nearby. We set our watches – primarily for time and got underway.

There were two gentlemen calling out most of the exercises, starting with a quick demo, and then the rest of us would follow. We did not count reps but performed the exercise to about 3 quarters of the field, jogged to the end, turned round, and got on with the next exercise.

The exercises consisted of running form drills and some version of plyometrics. I’ve googled a lot of the names of these exercises, but different people may call them differently.

These exercises will help build leg and glutes muscles and generally help you run faster with fewer injuries.

Every now and again, you’d have the light banter, but you could tell everybody was giving it their best. The leaders encouraged the team throughout including using the correct form.

I consider myself to be relatively fit, but I had to admit, I had some trouble with some of the exercises, especially anything that involved some type of explosive moves or had some variation of squatting.

The big lesson for me in this was that these type of exercises must become a part and parcel of my routine if I’m to keep improving. 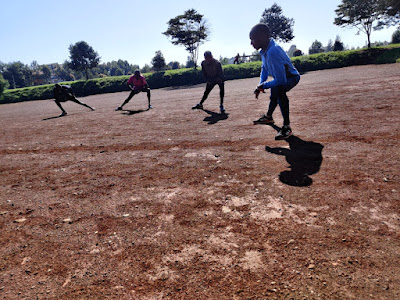 The leader of the group explained that we should be aiming to do this at least twice a week.

Cool Down and Stretching

After about 50 minutes or so of the non-stop exercises, it was time to stretch and cool down. I loved that we got into a big circle for the stretches. This was a mixture of cool down exercises, balance exercises with lots of stretches thrown in.

For example, we had a set of mountain climbers, lots of squats, followed by lots of static stretching, and balance type of exercises. The encouragement never stopped from different members, and it was obvious this a very team-oriented affair where everybody is willing to help each other out.

At the end everybody had to come up with a different stretch/exercise for the group including me. Lots of fun and a sign of how much they respect everybody’s contribution.

The Team and the Champions Mindset

The guys and girls in this group are very fit, very flexible, and very determined to keep improving. They have full faith that this is the way to succeed. They work extremely hard and are very willing to push themselves. Not once did anybody complain that something was too challenging, or that it was taking too long.

In the end, I got to chat with a few of the guys in the group and they are all very willing to share their experiences. They discussed how much we should be stretching, and the consensus was it’s preferable to cut down on a run to have enough time to stretch.

We also discussed what strength training should look like for a runner – a post for another day.

I finally understood what it means to give yourself advantages during the competition based on how you do your training. A simple example if you train in heavy shoes, using a lighter shoe in the race is an advantage.

I picked up a lot of information on other running aspects, something that would not have been possible without the visit.

I got some new insights into the mindset of these champions, which explains what makes them so successful.

I plan to visit Justin and his family again next time I’m in Kenya. They said I have an open invitation and I plan to use it.

The goal will be to complete a full week of training in addition to visiting my new friends in the land of the champions.

Justin and his family are very generous hosts, and they made my visit very rewarding. Thank you so much for that and everything.

A big thank you to the Annex Group Eldoret for letting me join in training.

If you get a chance to visit with Justin – don’t think twice about it just do it!

Finally, if you are not training with Justin, but are interested in a trip to Kenya that includes some elite training, check out my friends at Kisima Travel for a custom made athletic trip 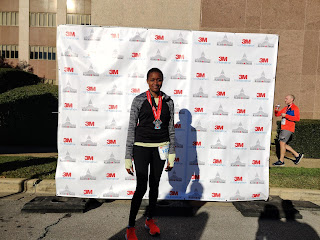 Jane Mepham is the founder and owner of  Elgon Financial Advisors – an independent virtual Financial Planning Firm that serves Foreign-born families who are citizens, green card holders or on work visas. She is based in Austin Texas. She is training for her first full marathon with Justin’s help.
By Justin Lagat The Kenyan Athlete on 11/03/2021 11:22:00 am